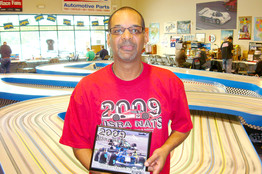 The three men are part of the shrinking world of slot-car racing, which is gathered this week at Mid-America Raceway and Hobbies (www.slotcar1.com) in this leafy suburb west of Chicago. The event is the United Slot Racers Association’s Scale Division National Championships (the Wing-Car Division Nationals will be in Farmingville, N.Y., in late July).